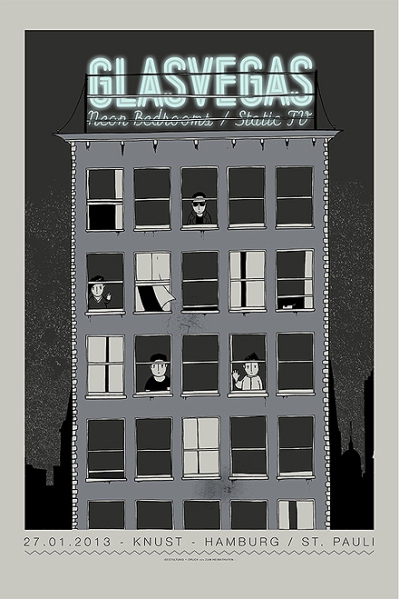 Those inky Huns are back again! What an honour it is to have samples of their wares hanging on our walls and in our clubs – ’nuff said really.

In truth this is a shockingly brief bio as the number of these things we have to write is growing and so are the numbers of places to hang in – its getting difficult to keep up with all the duties! This remarkable body of work that The Stick Up has collected from Germany has frankly made this profile a daunting prospect – hence them being written about last!

Really do check out their link down there as the wealth of quality posters in their electronic vault is breathtaking – like a hot currywurst!

Look out for a range of work so varied in mood and style that it would be impossible to sum up in one bloggy sentence. (I bailed out quite successfully there don’t you think?)

Or read about what we wrote about Das Posterkrauts in 2013 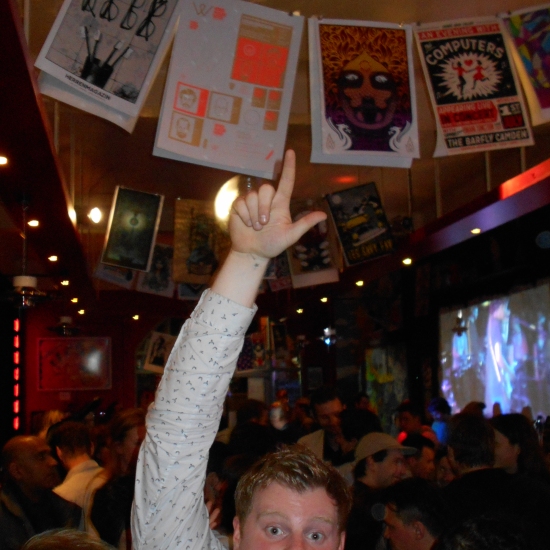 Introducing a brand new sticker-upperer, a dark horse and mystery man : Tommy Davidson. We have encountered a lot of gigposter artists at festivals, exhibitions, police line-ups etc. certainly the majority of the British poster-makers, but as yet this mysterious drummer and scritcher of the North has so far evaded our investigations.

One thing for sure is he is at large in Leeds, as there is much printed evidence showing how he has been active in the vicinity of the Brudenel Social Club (a venue of underground repute). We will try and get some security footage or perhaps a photo-fit soon, in the meantime, his posters are in our custody at the Stick Up shop – we appeal to you the Brighton public and also folks attending the Great Escape to come down, witness and leave a statement.

Look out for fine lined drawings that have clearly been the work of a professional and an obsessive. Hours (probably moonlit ones) have been spent getting the detail down on these designs – give them your close inspection.

We are the curators of The Stick Up, we are the ones who persuaded all the other artists to participate, who secured the venues and then received, unwrapped, stock-checked and hung all those posters.

We’re the ones who sat up till stupid o’clock making this blooming site, the flyers, the bloody printable/downloadable trail map!… we’re the ones who have to smile and greet you, to have a float ready, and the tubes and the answers to all the questions. We’re the ones who’ll have to take it all down and recheck the stock, reparcel the stock and then send it home to the respective studios… we’re the one’s who’ll do it again next year.

Or read about what we wrote about ourselves in 2013

When Gary “Horse” McGarvey is whizzing round Liverpool’s Sound City Festival getting all the last minute things done, it has been on at least a couple of occasions Johanna Wilson who has been trusted to take the helm of the Screenadelica show (with help from her lackies, a host of other artists and volunteers – your humble Stick Up curator included).
Ambitious, feisty, hardworking and a lot of fun “That Girl” is going places – possibly via the offy and a record shop or two…

We were very happy to have her work brought down to display – there’s some pretty dark and moody psychedelia going on in there which is pitched perfectly for the bands she has chosen.

Look out for oscillating opiated waves and patterns that pull the eye around the design. Often, themes of magic and mysticism that drive her non-poster artwork creep into her poster work too – don’t get spooked!

Screen-printed gigposter : The Warlocks – That Girl 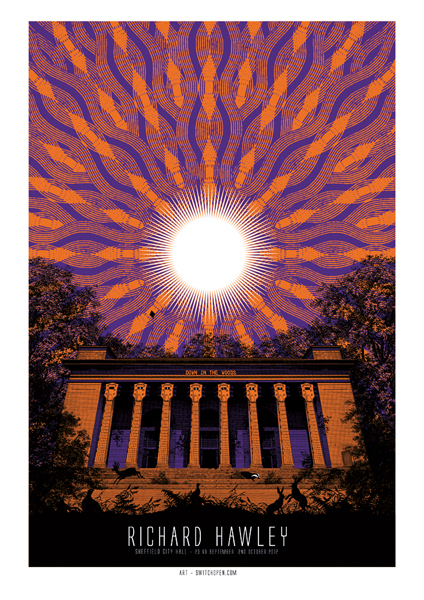 Well what do you know? We have managed to get one of the UK’s most established contemporary gig-poster makers on to Brighton walls this year – possibly for the first time since the very first Great Escape Festival, when The Basement arts foundation of The Argus Lofts hosted the seminal Sub-Screen Sonic poster show.

Based in his Switchopen studio in Manchester, Nick was one of the first UK gigposter artists that we knew of and certainly the first that we shook hands with. It’s great to have his work in the show and we’re pretty sure many of you will recognise his style as it has long adorned posters for such festivals as The Green Man and End Of The Road.

Look out for some posters depicting fairy-tale like bird-boxes, hot air balloons and arboreal scenes, and others that explore spookier themes – all busy with Gustave Dore inspired lines and hatching and all lit by some dazzling moon, distant nova or sparkling gemstone. 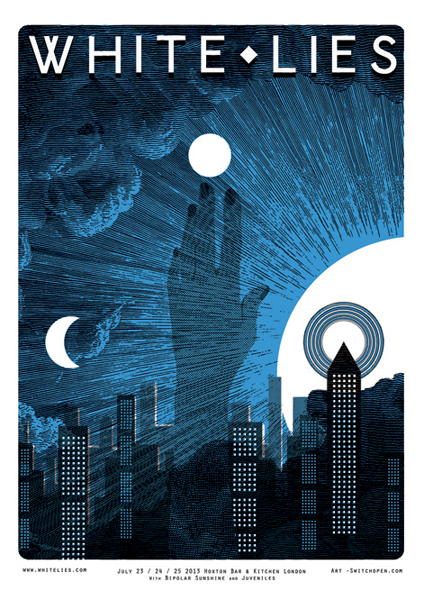 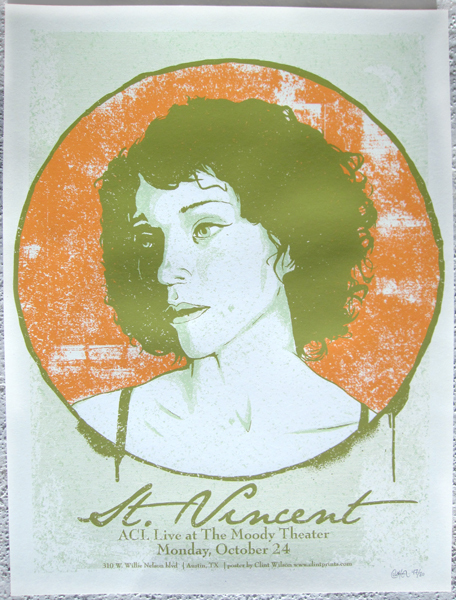 We have a treat for the pop-pickers who are heading along to our poster show – how about some posters for Beyonce, Justin Timberlake and Taylor Swift gigs? Yes yes yes!
That’s not the sum total of Clint’s work but it’s certainly worth a mention we feel…

Clint hails from Austin Texas and was one of the very cool and hospitable hosts to the travelling poster-makers who headed that way to take part in the Flatstock convention… so you know, there was an awful lot of bbq and beer going on over there – every night! It was actually tricky to get to see a band over there for all the ale and cooked meats flying around – wow.

So yes, we hope y’all will extend a hearty welcome to the posters of our transatlantic friend, come and grab a tube-full.

Screen-printed gig poster : The Get Up Kids – Clint Wilson

Look out for very professionally printed wares on good quality stock, they feel real good and are registered perfectly… there’s a real range of formats, including portraiture and textural space vistas 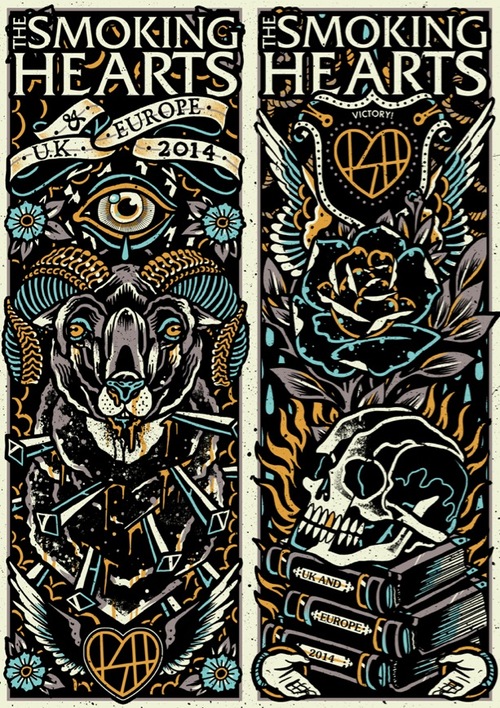 “There are several different types of writer” I was once told by an editor, whose tight, uncomfortable little wing I was trying unsuccessfully to be nurtured under… “I like the meat and bones, concise and factual type of writer” he said, gazing down on me like a work-weary schoolmaster “not your ‘diarist’ style, where you seem unable to divorce your own sensation and experience from any subject you are asked to report on!” he continued, clearly unhappy that we were sharing the same air in the little office where we would meet each week.

The meat and bones of this here profile page is that Craig Robson makes good poster.

The bit I can’t resist telling you is that despite all the skulls and tattoo inspired/inspiring phantasmagoria, despite the ear splitting roar of the bands that these posters are for, I know (because I was there) that Craig – in his denim waistcoat with black-widowed gang patches – is petrified of losing at Jenga!
When, between swigs of beer, I haphazardly clawed free bricks near the bottom twisting everything above them by about 40 degrees, to my glee – Craig got the willies real bad!
On his turn he would circle the tower on tiptoe with beads of sweat forming on his brow. With a squeak he would tap away at the safest piece possible and, having placed it in its careful, balanced resting place, he would turn, take a couple of steps and only then allow himself his first breathe of the 2 or 3 minute ordeal.
Keep that in mind when admiring the craftsmanship of his posters kids – keep that in mind.

Look out for wreaths of roses a’drip with blood, hangman nooses and other classic ghost story artifacts. Craig’s use of line and it’s steady, almost cartoon-like weight is really what makes his work such a treat in this curator’s opinion.

Or read about what we wrote about Craig in 2013

Debuting this year at The Stick Up Poster Show is the work of a design studio / print-press / gallery space located in deepest darkest Bristol – well, Stokes Croft – just round the corner from the somewhat legendary nightclubs Lakota and Blue Mountain. We’re not sure if the Jacknife gang are the “throw some shapes” sort of outfit however, their posters (though varying in style) tend to be a celebration of all things gritty and rock – Top Dogs Chris Hopewell and Bear Hackenbush for example, both produce work with a key-screen that appears to be printed with motorbike oil!

We gather that along with their posters, there will be examples of artwork from the rest of the group – Rosie Lea, Ashley Clarke, Sepr and Tape Ears, but as this little profile is written, we haven’t yet had a peep at the outfit’s tubes. It is with considerable confidence however, that we can say quite plainly, the rock’n’rollers amongst you will most definitely enjoy their work. 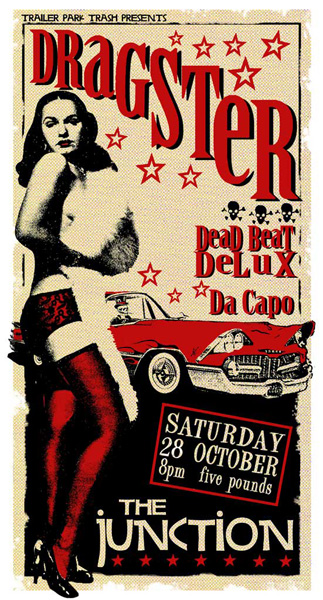 Brighton based Jemma is exhibiting with us again this year we’re pleased to announce!
Her fanciful swirling horses, dotted moths and marionettes are poised to dazzle and daze and we’re very sure that, as is always the case, a good number of the unwitting public will fall under her spell and reach for their purses – so, act quick if you spot a candied treat that would brighten some corner of your home…
…someone else will get their hands on your precious otherwise! 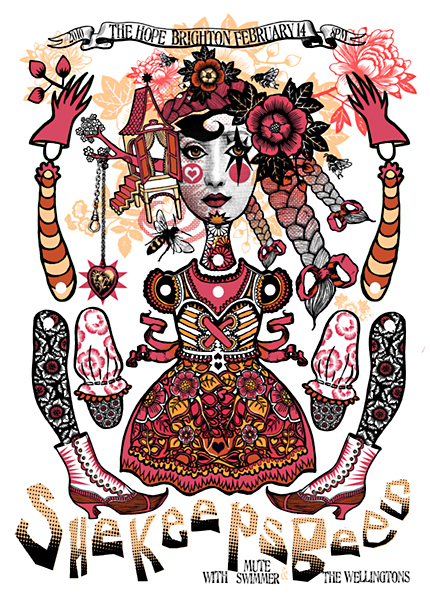 Or read about what we wrote about Jemma in 2013